Thanks to Dania and Jill we are now famous!

We are more than happy to teach interested parties our tradition of baking bread in a wood burning stone oven. We bake every first Saturday each month...God and weather permitting. Follow this link to read the article

We have had a number of requests for a book by Edgar Knowlton that is a reference/ history book about the immigrants of Portuguese ancestry to the Hawaiian islands. This book is out of print and will not be recast. The Hawaii Public Library has a copy that you can view only when in our State. You will have to request its use with them as not all libraries in Hawaii have this book available for walk in viewing.

Contacts regarding Genealogy should be made to:
Website: portuguesegenealogicalandhistoricalsocietyofhawaii.com
Phone: (808)841-5044
Address: 99-077 Hokio Place, Aiea, HI 96701
Email: PGSHOahu@hotmail.com
Office hours are: Mon/Wed/Fri from 10:00-3:00pm.
There is a fee for their service.

I hope this helps you in your quest to learn more about your Portuguese roots. We are a good people. 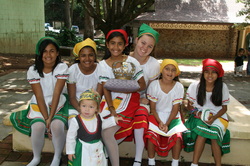 On May 12, 2012, the Maui Portuguese Cultural Club gathered together to celebrate the completion of repairs done to the Portuguese Heritage Garden in Kepaniwai Park in Iao Valley.
The Program began with the Coronation of Mary ceremony done by the children and grandchildren of club members escorted by Father John of St. Anthony Parish in Wailuku.  The event featured a display of Portuguese artifacts and exports, a country and craft store (selling Stone Oven Bread, jams, jellies, pickles and preserves, decorated potted plants, aprons, rooster grocery bags, our cookbook and other hand made items donated by our members) and a Regional Fashion show of Portuguese cultural dress.  Lunch was served which consisted of Caldo Verde (Portuguese White Bean Soup) roll and imported Açorean iced tea.
Pictured here are some of the children who participated in the festa and performed a traditional dance for the crowd. Pictured below are snapshots of the event.
There were over 200 people in attendance at the Festa coming from as far away as the Açores...who were visiting Maui at the time, who laughed when they said "We came all the way to Hawaii and absolutely HAD to attend the Portuguese Festa put on by the Maui Portuguese Cultural Club."  Everyone said that the day was beautiful, the food was ono, the program delightful and interesting, and that they learned a lot about the Portuguese culture at the Festa.  THAT...is the mission of our club. 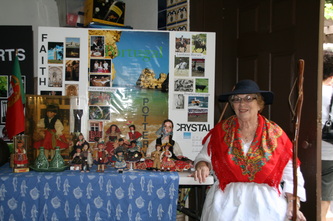 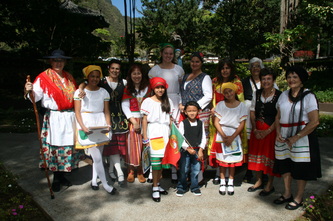 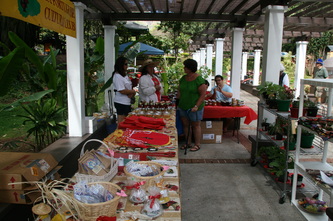 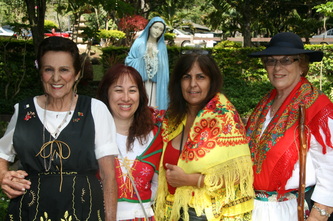 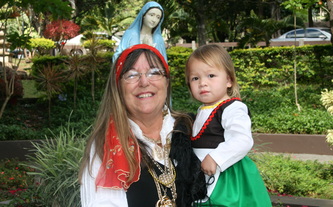 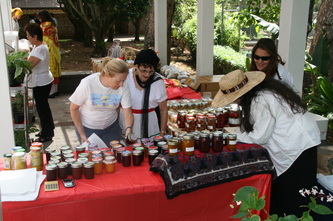 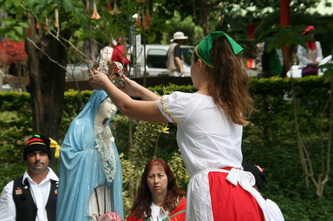 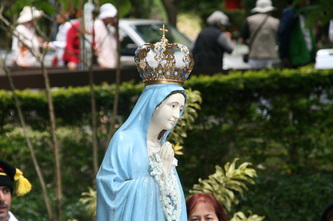 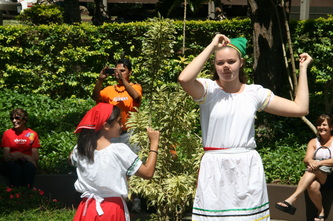 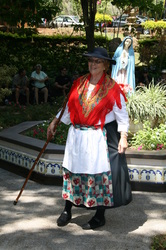 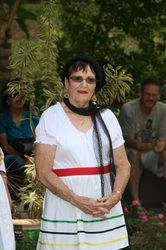 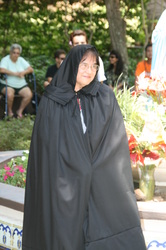 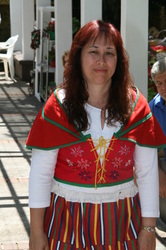 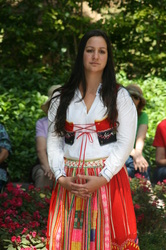 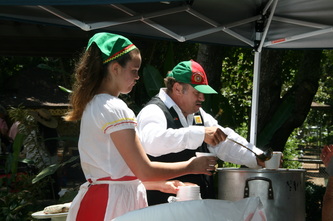 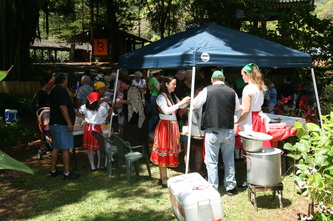 The Chamarita - Traditional Dance of Portugal 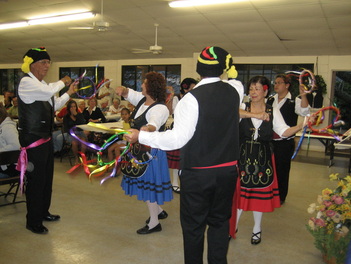 The dance in Portugal is a very important way in which to celebrate special occasions and a means through which a young man can meet a young woman.  Dating practices in Portugal are very strict and sweethearts are not allowed to touch each other except during the Chamarita and they are still under the watchful eye of vigilant parents.

The traditional Chamarita resembles a western American square dance where the group dances according to movements that are called out by a caller.  Musicians play lively tunes on guitar and mandolin.  During Festas, or festivals, the people of the land gather to celebrate the harvest or a holy day proclaimed by the Catholic Church and the Chamarita is always a part of the celebration.

Elaborate costumes are worn by each performing group and all march in a parade ending or beginning at a Church.  Costumes vary depending upon which region of Portugal you live ranging from heavy woolen outfits and thickly felted hats in the colder regions to colorfully embroidered cotton outfits of the Southern parts of Portugal, Madeira and the Açores.

Pictured above and below are the Maui Portuguese Cultural Club members performing the Chamarita for the community at a Portuguese Festa on Maui.  Dancers are:  Walter Ornellas, Roseline DeMello, Jacob Lindsey, Bernice Tabbal and Bette Martin.  Below, are members learning how to dance the Chamarita, bake bread and celebrate together Portugal style. 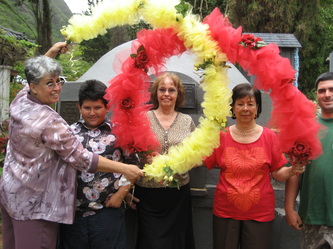 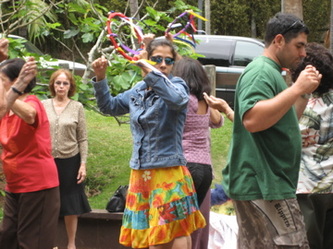 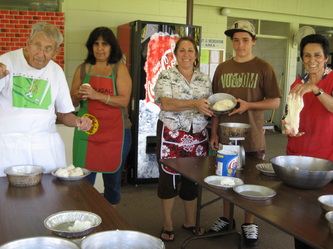 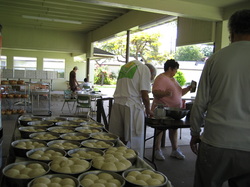 Our main means of fundraising is through the baking of Portuguese White Bread made and baked in a traditional Stone oven.  Our members gather to make the "masa" that are formed into individual rolls or "bolingas".   Also shared at these monthly, bread making, gatherings are oral traditions passed on to the new generation of Portuguese members of what their parents did to preserve their culture.  Portuguese words and phrases are learned in this way and eagerly absorbed by the younger generation who did not learn the language as the older ones did.

Pictured here are a few members as they prepare the bread for baking in our stone oven at Hale Mahaolu, Akahi.

The Forno - The Portuguese Stone Oven 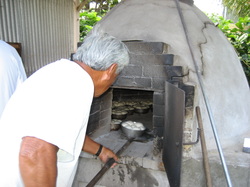 Pronounced "Foor no", the Portuguese oven is heated by burning wood inside of a domed enclosure to heat the oven walls and floor...much like a Pizza oven. The coals are then removed and the oven temperature is tested by throwing a handful of flour on the floor of the oven.  The oven master watches for how fast the flour turns brown to determine if the oven is hot enough to bake bread.  32 loaves at a time are inserted into the oven and soon emerge golden, crispy crusted on the outside and moist on the inside.  The bread has a light, smoky flavor that has our customers coming back for more.  The same is true of our Cinnamon Bread which does not last very long once it is baked.

PRESERVING THE TRADITION OF THE LAPINHA 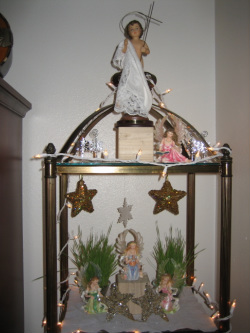 The Portuguese have an annual Catholic tradition which involves displaying religious statues depicting the Christ child, the angels, people, animals and plants.  It represents the seven days of creation.  It is assembled at Christmas and is left in place until the new year. The Lapinha (pronounced Lah peen ya) means the "Little Grotto".

Lapinhas come in many different shapes and sizes ranging from the simple to the ornate.  Some Lapinha will have up to 30 saints, hundreds of animal figurines and ornate holy items that can sometimes take up the area of a small bedroom.  Candles are usually placed on it and lit every night.  Modern lapinha use electric Christmas lights as a much safer option.

Pictured here is a simple Lapinha.  The top-most shelf of all Lapinha will hold the Menino Jesus, or the Child Jesus.  The angels and stars represent the heavens.  Little bowls of wheat seed, placed on the Lapingha 12 days before Christmas, are carefully watered and drained daily until they sprout forming a living arrangement representing both the earth and the coming of the Eucharist through Christ as bread.

The next rung down will hold the people, such as saints and holy items.  The final rung will hold the animals that were created by God.

This tradition was brought to Hawaii by the Portuguese people who came from the Açores and Madeira.  It was a lot of fun putting this one together.  I have a very small house and this little curio shelf was all I could fit in my living room.  I think that every Portuguese household should erect a Lapinha of their own and follow this simple, yet beautiful, Christmas tradition.  I no longer need a Christmas tree as gifts are placed at the foot of the Lapinha as offerings of love and devotion to our faith, family and friends. 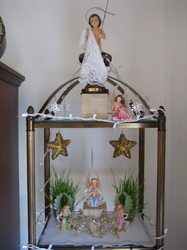 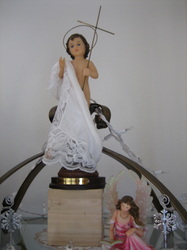 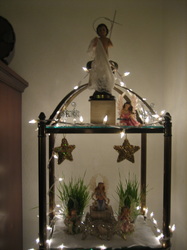 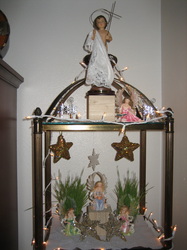 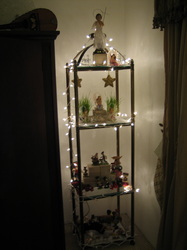