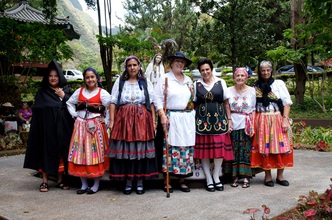 A BEAUTIFUL DAY FOR A FESTA!

MAY 10, 2014 was bright and sunny. The Maui Portuguese Cultural Club presented its annual Festa to a small crowd of onlookers. The Caldo Verde soup was sooooo good...we sold out! The stone oven bread we baked was gone by 2:00pm.  Our Country Store made a large profit selling an early crop of common mango which was made into pickled mango and mango seed, chow chow pickles, li hing mui pipinolas and pickled peaches.

The Coronation ceremony was again hosted by Father John, Marianist father from St. Anthony Parish in Wailuku. Our colorful costumes made the day more vibrant as we celebrated the appearance of the Blessed Mother in Fatima one hundred years ago.

The children danced the Charmarita and had lots of fun!  See the slide show for more pictures! 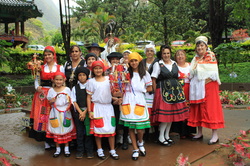 The 2013 Festa was a wet and dreary day but the undaunted members of the Maui Portuguese Cultural Club brought smiles and colorful costumes to brighten the day for over 150 attendees.

Despite the weather, the club's annual Festa was a success. Serving Portuguese Soup, roll and Açorean Iced Tea to ticket holders and visitors, the club warmed the stomachs and the hearts of the people who came.  The annual fundraiser sold: jams, jellies, pickles, Traditional Stone Oven White and Cinnamon Bread, tremoçes, Portuguese plants, hand made crafts, Braceros Roosters, five finger vases and other items from Portugal.

The Festa began with a Coronation Ceremony where the children placed a crown upon the statue of the blessed mother situated in the middle of the garden, led by Father John, a Marianist priest from St. Anthony Parish in Wailuku. MPCC members have been busy replanting the garden at Kepaniwai, Portuguese Heritage Garden and repainting the statue of Mary. Her blue veil paint was chipping off so it was time to update her wardrobe. The club changed her blue veil into a white and gold veil to resemble Our Lady of Fatima, Mary as she appeared to Francisco, Jacintha and Lucia in 1917 in Fatima, Portugal. The smaller statue in the upper garden was also repainted adding a new coat of paint and roof to the little grotto house that surrounds her.

Next, the club had a Regional Fashion Show as members wore traditional costumes of different areas of Portugal. Featured were costumes from the Minho, Braceros, Algarve, Evora, Madeira, Lisboa and the Acores.  The children danced the Charmarita and everyone had a good time. Also, to add song and delicious malassadas to this Maui Portuguese Cultural Club event, the Portuguese Association of Maui Club and the Portuguese Chorale joined us in this celebration and brought the language and music of Portugal to our souls. Songs in Portuguese were sung for the Coronation ceremony, led by Irene Cambra, and the malassadas were a delightful treat to all who came by.

The Pictures below highlight the day.